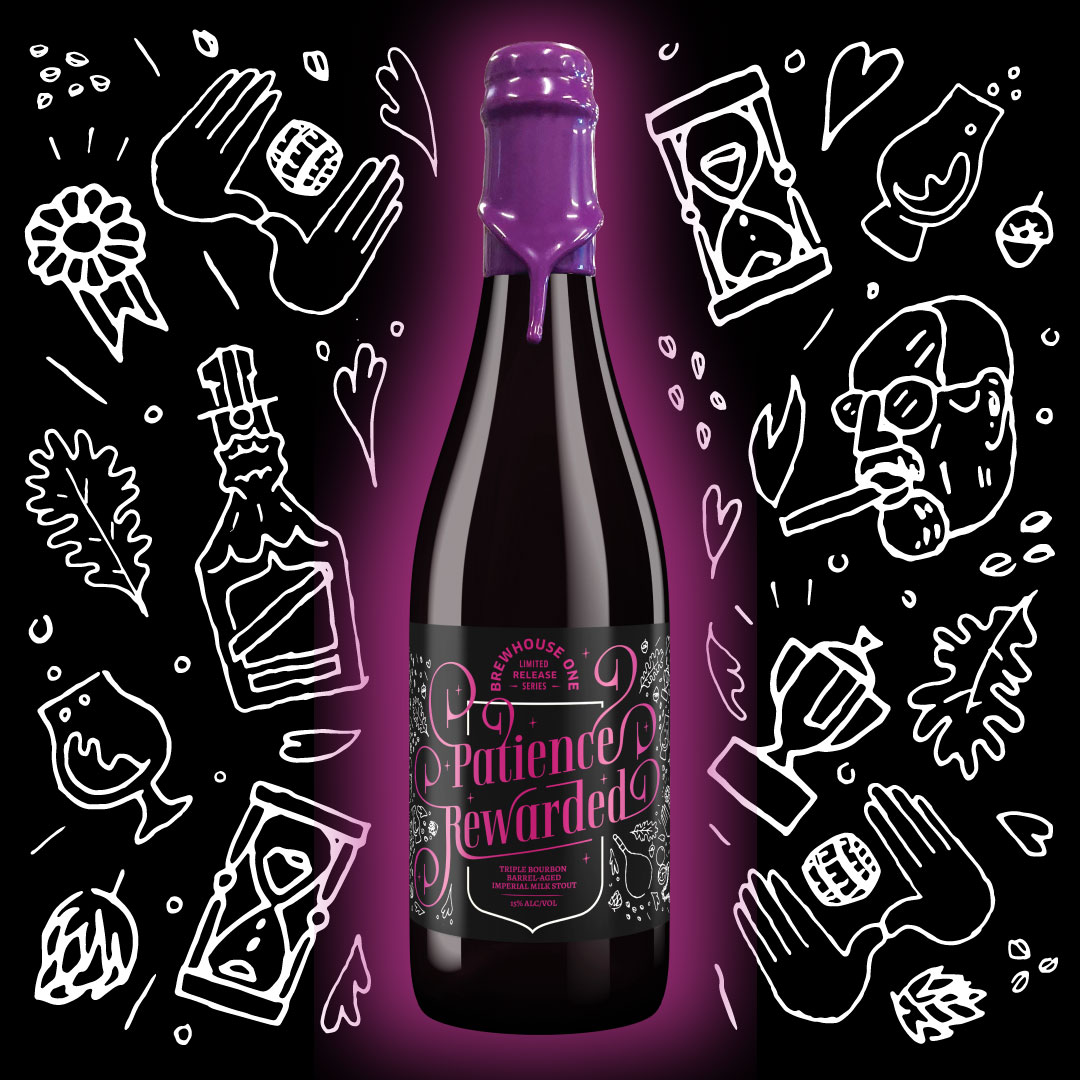 “Waiting is not wasting. It is a strategy for champing for greater things.” – Ifeanyi Enoch Onuoha.

About 16 months ago we brewed a double mash milk stout with something big in mind. We boiled the mash for 36 hours, reducing the liquid down before adding the second mash and then reducing again. The end result was a massive base beer, rich and viscous, that was destined for something great.

Over the years we’ve seen our barrel-aging program grow in ways that we could not have predicted. What started with two whiskey barrels and a whim has become a behemoth inventory with over 6,000 barrels last year alone. Our barrel-aging program has grown to become one of the largest in the nation. A tour through our barrel storage facility is a full-on sensory experience before even tasting the contents. Whiskey and wood assault your sense of smell in the most pleasant ways as your neck cranes trying to take in the scope of the size of the space. Row upon row of these beautiful wooden vessels wait silently, full, for our brewers to blend them into our magically delicious year-round portfolio of barrel-aged beers.

The magic ingredient imparted by this facility is time. We don’t often think of the fourth dimension as the fifth ingredient in beer, but this space is measured not just by gallons and hectoliters, but also by weeks, months and years.  When our brewers fill these wooden vessels with a particular base beer, they are setting them off on an indeterminate amount of time, giving the beer enough time and space that it needs to develop in the ways they long for, but can’t always predict. There is no magic number of days, weeks, or months that beer requires to blossom into something special and beautiful.

As you move through the stacks in our rack house, your mind categorizes all of the distilleries branded into each barrel head. Racks of American oak barrels, previously home to bourbon, rye, rum, and tequila are flanked here and there by French oak puncheons and hogsheads. New barrels arrive every week to start their journey to become vessels for either Whiskey Barrel Stout, Bourbon Barrel Quad or Rye on Rye, all barrel-aged beers that are now available year-round.  Sometimes we come across gems, barrels of distinction that are so rare that due consideration is needed when determining the right usage for these unique barrels. When Quinn Reeder, the head of the barrel-aging program, comes across these distinguished barrels he has to consider the right base beer to use when filling these vessels. Often, with a limited release, a discussion is held about the addition of various adjuncts which would be appropriate companions to remaining flavors left by the previous occupant of the barrel.

Sometimes when lightning strikes and we accrue a selection of barrels of high regard, Quinn feels it’s enough to let the whiskey and the wood do the talking.

When our brewers received an initial load of barrels from highly esteemed whiskey distilleries, they realized immediately that these vessels were destined for something special and were immediately filled with a double mashed milk stout.

“The 12 year was the first cask, we decided to use this one first, mainly because it set a good base for primary aging and the barrel character is in line with the profile of the other beers in our cellar.”

In addition to accruing the 12-year barrels, we were magically offered barrels of two different vintages from another distillery of high regard.

“When deciding the order of cask aging, we think of it as building a new layer each time you put the beer in a new barrel. You want your most unique and coveted flavors to be the last cask the beer was aged in, and not to cover them up with something younger or harsher” said Quinn.

The imperial milk stout was moved from the 12-year to a wonderful 18-year-old bourbon barrel. Building on the profile from the 12 year, the intention here was to coax more complex flavors from the wood, like vanilla and tobacco.

“We would have used this barrel for finishing had we not also received a 23-year-old barrel from the same distillery”.

The beer spent its final rest in an impressive 23-year-old bourbon barrel. “This is a bonkers barrel” Quinn replied and went on to say “we used this as the finishing barrel because this had the most complex and individuality of all the barrels used. Really getting nice mellow flavors with a 23-year-old barrel complements the rich and smooth characteristics of an imperial milk stout”

When chatting about the final product Quinn said “The idea behind this release was to get a bunch of flavors, using only wood and barrel aging, no adjuncts at all.”

We recommend drinking this big beer at 45F, at this temperature you’ll get a lot of the richer profiles of chocolate and coffee and the bourbon will be more prominent at this temp. The final product carries a lot of bourbon character, but as it warms you’ll notice the whiskey dissipates and makes room for more flavors to develop. In addition to tobacco and caramel, dark chocolate turns into milk chocolate and the wood really starts to present itself.

“It’s one of the few beers I’ve had where you can really taste wood along with the bourbon.”

Let’s wax a little on this beer.

When it came time to package this beer we realized that due to the small number of barrels available, this was going to be a very limited release. We filled around five hundred bottles by hand, using our semi-retired vintage 750ml champagne bottling line. As we were discussing the logistics of getting such an impressive beer into bottles, we realized that we had a beer that was fit for a queen or king, and as such, we needed to give it the regal treatment. For the first time in Boulevard history, we hand-dipped each bottle in purple wax, and adorned the top of each bottle with a hand-stamped Boulevard diamond logo, because “Why not?”

At the time of purchase, this beer will be going on 18 months since it was first brewed, it has aged and mellowed quite a bit. This beer is absolutely cellar stable and as it continues to age, the booziness will certainly mellow and other flavors will come out of the darker malts like toffee and more subtle coffee. You can certainly age this beer to see how it develops but, in my opinion, you’ve waited long enough and it’s time to consider your patience, rewarded.

Patience Rewarded will be *available for purchase in the Tours & Rec Gift Shop at 12pm, New Beers Eve, April 6th.

Patience Rewarded is available ONLY in our Tours & Rec Center and won't see distribution.