Throughout the holiday season we'll take a moment to feature one of the Beer Elves whose name you may find on a bottle of Nutcracker Ale. Raise a toast to these important members of our brewery family that all work hard to get beer in your glass. 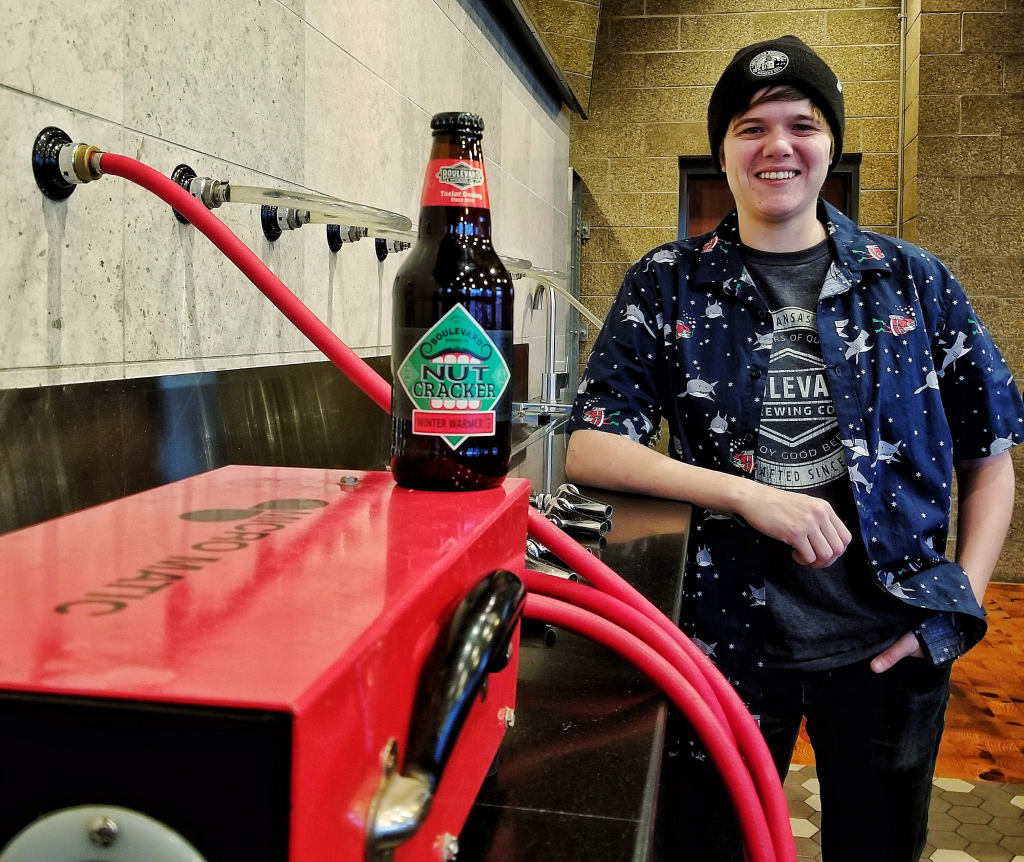 It’s a crushing feeling when you order a beer on tap, then realize after taking the first sip that poorly maintained draft lines have ruined the sensory experience of what was supposed to be a fresh, delicious beer. Beer Elf Taelor Donley is here to ensure that you never have that disappointing experience while visiting the brewery.

The Midwest native worked at local retailer Lukas Liquor before joining the Boulevard team in 2016 as a barback in the newly opened Tours & Recreation Center. Thanks to a passion for beer and dedication to quality assurance, that role transformed into Taelor’s current title of Draft Technician. With 106 different taps around the brewery to maintain, ranging from the Beer Hall to our event spaces and various kegerators, Taelor has sole responsibility for ensuring the cleanliness and proper functionality of every single one. Luckily, a knowledgeable mentor was available to be a starting guide on the quest for draft beer quality prowess: Neil Witte, a Master Cicerone, Brewer’s Association Quality Ambassador, and former Field Quality and Training Manager for Boulevard and Duvel USA. Taelor was able to meet and work with Neil initially, and still stays in contact with him occasionally. As Taelor recalls, “the best feeling ever was doing my first big install and having him see it and tell me he’s ‘right proud of me.’”

The thirst (pun intended) for knowledge doesn’t quit, though. Taelor has taken advantage of multiple opportunities for education on draft beer quality, attending the Micro Matic Dispense Institute and Great American Beer Festival seminars. Connecting with others in the industry that share the passion for beer has served as continued inspiration to excel here at Boulevard.

Taelor has run into a fair share of interesting challenges in a short time at the brewery. Assigned the task of building a flexi draft kegerator for Duvel, Taelor answered the call and now Boulevard can proudly say we are the only place in the US to have such a system. “I enjoyed the challenge that it brought and the feeling of accomplishment once the system was up and running effectively.”

We’re fortunate to have Taelor here and acting as a sort of beer superhero, battling against the villainy of dirty and oxidized draft lines, and making sure that everything served here at Boulevard is just as the brewers intended. And luckily, Taelor feels pretty fortunate too. “Waking up every day and being excited to go to work is a feeling I finally understand.” Next time you’re at the brewery and are getting ready to take that first sip of beer, make a mental note to thank Taelor for making sure it tastes just right! 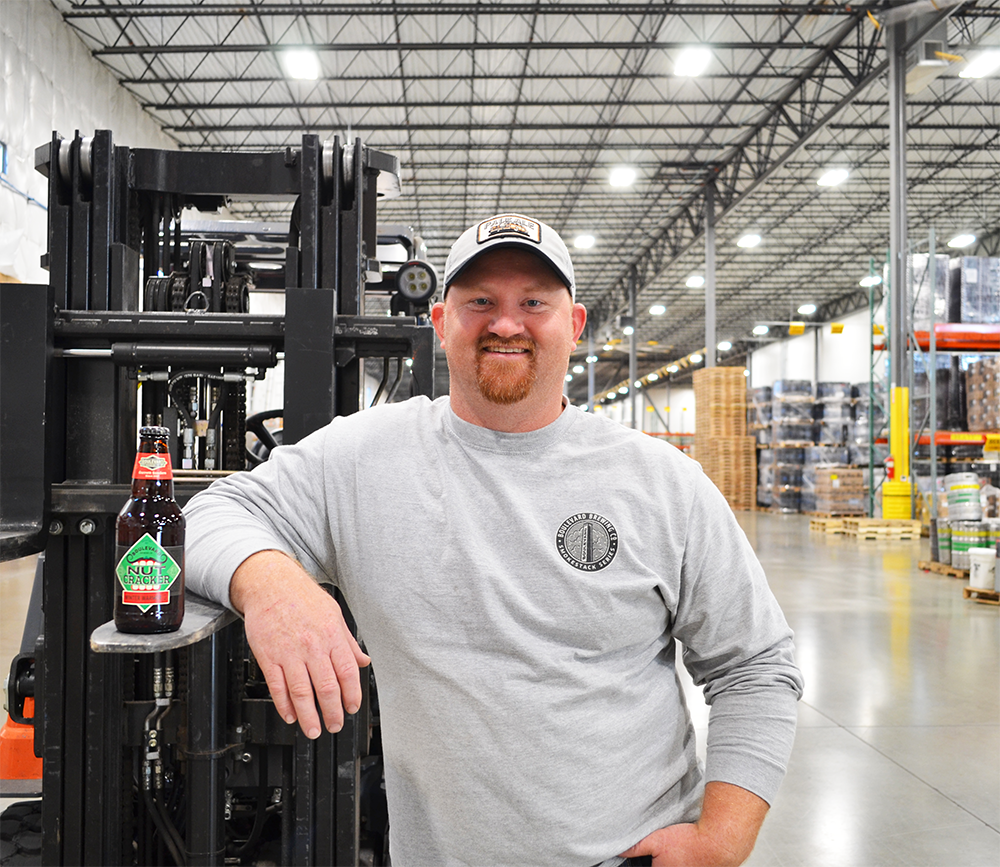 Brewing and packaging thousands of barrels of beer is all well and good, but it’s a futile effort if it doesn’t have somewhere to go and a way to get to thirsty people around the country. Enter Garrett Sanders, a Beer Elf with 10 years of experience at Boulevard as Warehouse Manager, ensuring that our beer is properly taken care of once it’s bottled, boxed, canned or kegged.

Back in 2007, Garrett decided to say goodbye to Big Sky Distributors (a now-defunct Kansas City beer, wine, and spirits wholesaler) and take his logistics talents to Boulevard to manage our inbound and outbound beer loads, plus storage of finished goods. Early on, he ran into one of the biggest complications in his decade at the brewery. One day a production trailer collapsed in front of the warehouse, with a full load of beer on it (Nutcracker, ironically). Though it could have been a disaster, Garrett’s team managed to unload and save all but one case of beer (*phew*).

Fortunately, he hasn’t run into any hurdles quite like that since, but he’s certainly seen his fair share of changes over the years. A drastic increase in the volume of beer produced as well as the overall number of SKUs going in and out of the warehouse necessitated a lot more space, time, manpower and attention to logistical detail. To help accommodate these needs, Garrett was able to move his main operations to a new 180,000 square foot warehouse in 2016. On average, around 9-11 truckloads of beer leave this warehouse each day, each carrying about 30 pallets (equivalent to 1200 cases or between 240-600 kegs depending on size). That’s a LOT of moving beer.

Making sure beer gets out the door is central to his role, but definitely not the only component. The warehouse is also home to our barrel cellar, where 5,000+ spirits and wine barrels live, plus our special events equipment like draft trailers, jockey boxes, etc. Along with ensuring that all these things live in perfect harmony together with our finished goods and that we use our space as efficiently as possible, Garrett manages the brewery’s fleet of vehicles.

We’re lucky to have Garrett at Boulevard not only for his mastery of a daunting and vital part of the brewery’s operations, but also because he’s simply a great guy. And fortunately, he feels the same way; asked about his favorite part of working at the brewery, he said “The great group of people that I work with on a daily basis, we are like family." 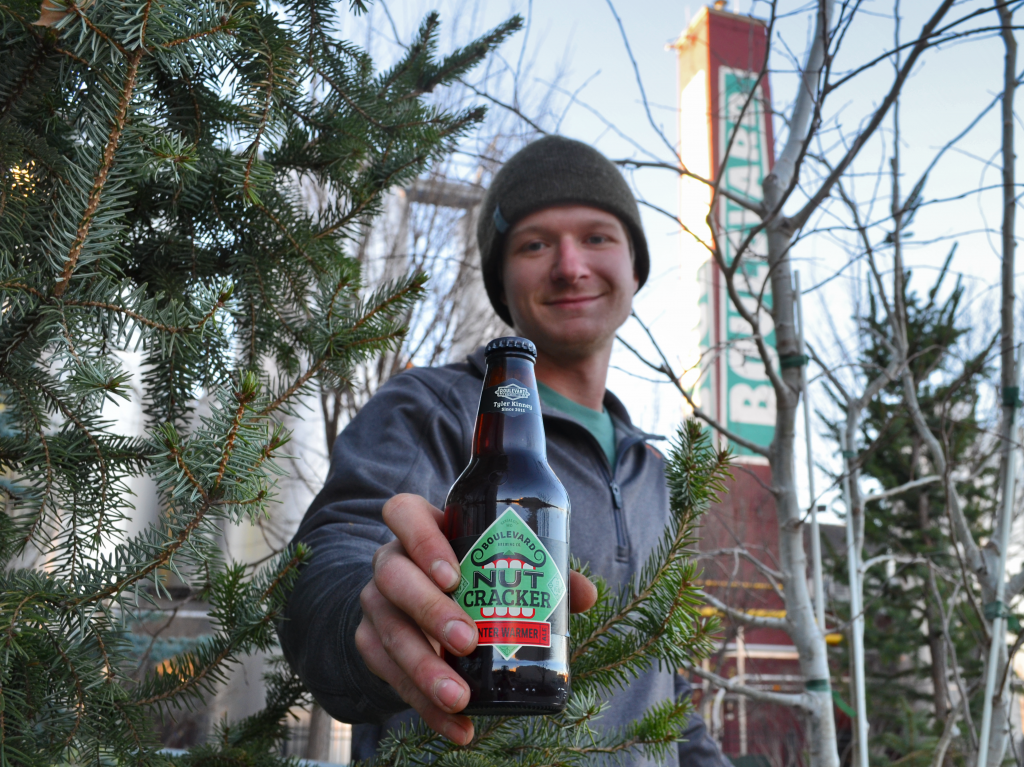 Here at Boulevard we obviously take great pride in the beer we produce, but we also strive to ensure an impeccable and memorable experience for brewery visitors. Beer Elf Tyler Kinney is an integral part of those efforts.

With a background in landscaping and concrete sculpture, Tyler joined Boulevard in December 2015 as Grounds Maintenance Technician. Responsible for designing, installing, and maintaining the environment that surrounds and fills our brewery campus, Tyler works hard to make certain that Boulevard as a destination is just as impressive as what we put into a bottle, keg, or can. Whether it’s planting conifer trees for ambiance in the colder months, or hundreds of flowers and potted plants that adorn the balconies of the brewery and Tours & Rec Center, plenty of meticulous planning and labor goes into making Boulevard a visually appealing place to be. He’s also currently in the midst of a project to revamp certain areas of the brewery’s landscape with new installments over these next few months. Don’t worry though, it’s not all work and no play for Tyler; he does take advantage of his time off to enjoy bikes, jam bands and bluegrass.

The next time you come by the Beer Hall for a drink, take a brewery tour, or find yourself in one of our event spaces, take a moment to look around and raise a toast (he prefers The Calling) to the beauty that Tyler helps to create here at Boulevard!

Eric Bessenbacher has seen some things, man. After nearly 24 years at Boulevard, he's one of the brewery’s longest-tenured current employees and has witnessed firsthand a significant amount of progress, growth and change since he started.

Originally brought on board in 1994 to wash kegs, Eric navigated his way through other areas of the brewery as time went on, including the original bottling line and then to filtration and brewing. Come October 2009, Eric became the first full-time scheduler that the brewery has ever had. Scheduling is crucially important here at Boulevard, and a task filled with a myriad of ever-shifting pieces. From ensuring maximum efficiency on a packed brew day (which could include as many as 8-10 brews) to seamless transitions between packaging runs (a busy day could see 630 bbls come through both the keg and bottling lines), Eric’s schedule is the master guide for our production teams.

Asked if there were any particular highlights from his many years at Boulevard, Eric said there weren’t any singular moments or events. Rather, he says it’s been memorable watching the brewery as a whole evolve. Seeing scores of new equipment come through the doors that changed the methods of production, or from selling 14,000 bbls the first year he was employed to exceeding that amount in a single month (23,000+ bbls in March 2017) recently.

The idea of being encouraged to sample beer each day at work seems like some kind of fantasy for many, but for Abby Zender, it's a key component of ensuring that all Boulevard beer that goes out the door is of the utmost quality. Hailing from Springfield, Missouri, Abby previously worked in food science research and development, specifically with enzyme modified cheeses and flavor formulations.

Fortunately for us, she decided to make a switch from cheese to beer, and these days she works as Boulevard's Quality Sensory Coordinator, managing the daily sensory panels in our quality lab, where employees taste beer to detect any off flavors or quality issues. To better hone her fellow Boulevardians' senses and abilities to pick up on these potential flaws, she also holds periodic sensory training sessions to teach them what to look for, what should cause concern, and how these attributes can be picked up during the brewing process. Abby's magic sliding doors of beer samples are the final stop for making sure our beer tastes as the brewers intended before it hits shelves or taps near you.

If you happen to grab a bottle of Nutcracker with Abby's name on it this year, be sure to take a moment to dedicate a sip to her and all the important work she does making sure EVERY sip tastes just like it's supposed to.