Snow & Tell, our newest winter seasonal beer, is being released to coincide with the change in the weather that occurs in the Midwest as we transition from crisp fall days into cooler, brisk nights. A malt blanket of sorts, Snow & Tell is our interpretation of a Scotch Ale or Wee Heavy. Ranging in alcohol from 6% up to 10% in more extreme examples of the style, Scotch Ales typically feature rich, caramel malt sweetness punctuated by spicy/herbal hops. 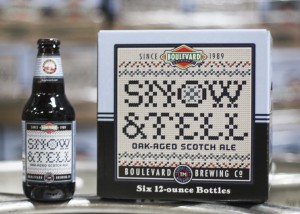 At 6.3 ABV, Snow & Tell is composed of our base pale malt, crystal/caramel malt, amber malt and just a touch of Beechwood smoked malt from Germany. At just under 1% of the total malt bill, the smoked malt lends subtle complexity without overpowering the layers of caramel and toffee flavors contributed by the crystal malt. Hopped with Magnum, Chinook and Styrian Goldings, Snow & Tell sees brief aging on medium toasted oak chips at the end of fermentation.

Opening with aromas of fig, raisins and caramel/toffee Snow & Tell stretches out, enveloping the palate with a lingering malt sweetness that transitions into spicy/herbal hop flavors coupled with a drying, oaky character. The hops are fairly minimal at 25 IBUs, but serve to keep Snow & Tell from becoming cloying. A great sipper on a cool night, we suggest pairing Snow & Tell with heavy meat dishes, strong aged cheeses, chocolate and shortbread.

Look for Snow & Tell in six packs of twelve ounce bottles and on draft where you’d normally find our seasonal releases. Deliveries of kegs will begin on Monday, November 2nd and bottles will begin being delivered on Tuesday, November 3rd.