One of the brightest stars in a city filled with culinary treasures, Christopher Elbow has been handcrafting masterpieces in chocolate for more than ten years. In that time the reputation of his artistic delicacies has spread around the globe. Elbow’s sweets are distinguished by their use of unusual and sometimes surprising flavors and ingredients; in that adventurous spirit we joined forces to bring you a very special Chocolate Ale. 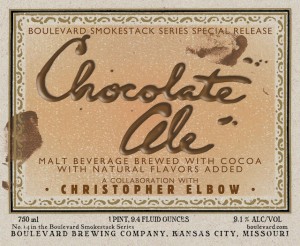 When we first introduced Chocolate Ale in February 2011, we were, um, surprised by the response. While originally intended as a one-time, one-off beer, like our other Smokestack collaborations, Chocolate Ale has developed a huge following that has managed to grow each year. As the release date nears, we’re flooded with calls, emails, and postings with questions about this special Limited Release beer. We hope this blog post provides some insight into the production, distribution and marketing of Chocolate Ale.

Distribution/Retail/Pricing: By law, we sell our beer to independent distributors, who in turn sell to retailers, who sell to beer drinkers. Our price to distributors, and our distributors’ price to retailers, is precisely the same for Chocolate Ale as it is for all of our Smokestack Series Limited Release offerings like Saison-Brett, Bourbon Barrel Quad and Rye-on-Rye. By law, we have no control over the price charged by retailers for any of our beers, including Chocolate Ale. Nor do we have control over which retailers receive our beer, when they receive it, or how or when they sell it.
Our Kansas City distributor tells us deliveries of Chocolate Ale to local retailers will take place throughout the first week of February. Hundreds of kegs to be served at area bars and restaurants will begin hitting taps on Monday, February 2nd. Deliveries of cases of bottles to area liquor stores will begin on Tuesday, February 3rd. It’s important to note that not all locations will receive their allocations of Chocolate Ale on these days as retailers have scheduled delivery days that happen throughout the week. Most retailers will receive Chocolate Ale on their normal delivery day. We do not, and will not, have access to this delivery schedule and will be unable to share which bars/restaurants or liquor stores currently have Chocolate Ale on tap or on their shelves.

Chocolate Ale is made available to distributors and retailers throughout our distribution network of 30 states and the District of Columbia, but as in years past, the lion’s share of Chocolate Ale remains in the Greater Kansas City Area to allow you, our loyal friends, the greatest opportunity to try this special beer.

Marketing: The media interest and coverage surrounding this year’s batch of Chocolate Ale is due to the increased following the beer has received during previous years. We’ve responded to reporter inquiries and done our best to provide them with the correct information to relay to their readers/listeners/viewers. As with any beer we brew, it is not our intention to hype a release to the point where demand exceeds supply.