Mid-Coast IPA was in our first Sample Twelve pack that featured Tasting Room beers and received a lot of love from beer drinkers. So much so that we decided to bring it back for the fall. For those of you who haven’t yet sampled Mid-Coast IPA, our goal was to create a super hoppy, in your face IPA unlike any IPA we’d previously brewed. The malt bill is very simple with pale malt and Munich malt creating a base for huge hop flavor and aroma to shine from the use of Topaz, Bravo, and Centennial hops on the brewhouse and Centennial, Amarillo, Citra, and Topaz for dry-hopping. At 5.6% ABV and just over 100 IBUs, Mid-Coast IPA is by far the most bitter beer that we brew. Oddly enough though, the combination of huge fruity hops and a clean malt base makes for a very drinkable beer.

Our newest Tasting Room beer, Oatmeal Stout, comes in at 5.5% ABV and 35 IBUs. We’ve had a couple of different versions of Oatmeal Stout on draft in our Tasting Room throughout the summer. The goal of our brewers was to create a chewy beer with round roasty/chocolate/coffee flavors with a slightly sweet finish. The malt bill is layered with Special B (Cara 300), chocolate malt, Black Pearl from Patagonia Malt, flaked barley, and flaked oats. These malts complement a base of pale malt and Maris Otter. At 35 IBUs, this beer is definitely about malt complexity, but Topaz, Saaz, and Styrian Golding hops provide just enough hop bitterness and flavor to prevent Oatmeal Stout from seeming cloyingly sweet. 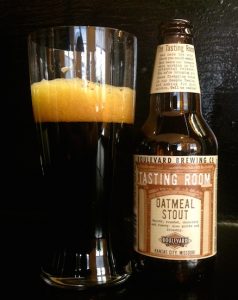 Both of the above beers can only be found in bottles in our Sample Twelve pack or on tap in our Tasting Room. A few kegs might make it out for special events and festivals, but you shouldn’t expect to see these beers as a regular draft in bars and restaurants.

As always with our Tasting Room beers, we’re interested in hearing what you have to say. Drink these beers and head to our website to provide feedback: