Our first Brewing Toys post took a look at our GC/MS used by the lab staff to analyze specific chemical and hop compounds in Boulevard beers. This post will examine a slightly less complex tool used several dozen times a day by the brewhouse and cellar crews.

The process of brewing beer on the brewhouse can be oversimplified to “making sugar water.” The amounts and types of grains used in the production of this sugary liquid called wort have an effect on the gravity or density of the wort and ultimately an effect on the alcohol by volume (ABV) of the finished beer. More fermentable sugar at the beginning of fermentation will result in a beer with a higher ABV than a beer with a relatively lower amount of fermentable sugar after the brewing process.

We measure this density (or percentage of sugar content) in degrees Plato. There are several instruments that are commonly used for this measurement including hydrometers or refractometers, but our brewers use a handheld oscillating u-tube densitometer. 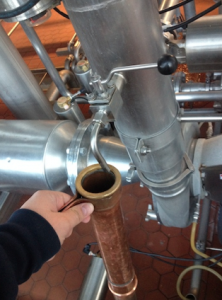 A wort sample is pulled from the wort kettle.

The sample is cooled and then filtered using a paper filter.

At this point, the brewer will draw a small amount of the cooled, filtered wort into the instrument using a trigger-like device on the back of the handle. This is where things get technical. The wort is drawn into a u-shaped glass tube that is oscillated at a known frequency. The introduction of the wort influences this oscillation in such a way that the device is able to calculate the density (sugar content) of the wort. Shown below is a picture of a beginning of boil measurement from a batch of Tank 7. Another measurement will be taken at the end of the boil, during the transfer of wort to the fermenter, and at several steps along the way during fermentation before the beer is finished and prepared for packaging.

The target for beginning of boil density for a batch of Tank 7 is 16.6 so you can see this measurement lets the brewer know that the batch might need to be boiled for a few minutes longer than normal to boil off more water vapor resulting in a higher concentration of sugar.

The oscillating u-tube densitometer certainly makes brewhouse and cellar life easier, but we still use the old school hydrometer every once in a while to check and maintain correct calibration of our fancy brewing toy.

Is there anything you’d like to see featured in a future installment of Brewing Toys? Let me know in the comments section of our Facebook page or tweet at me.