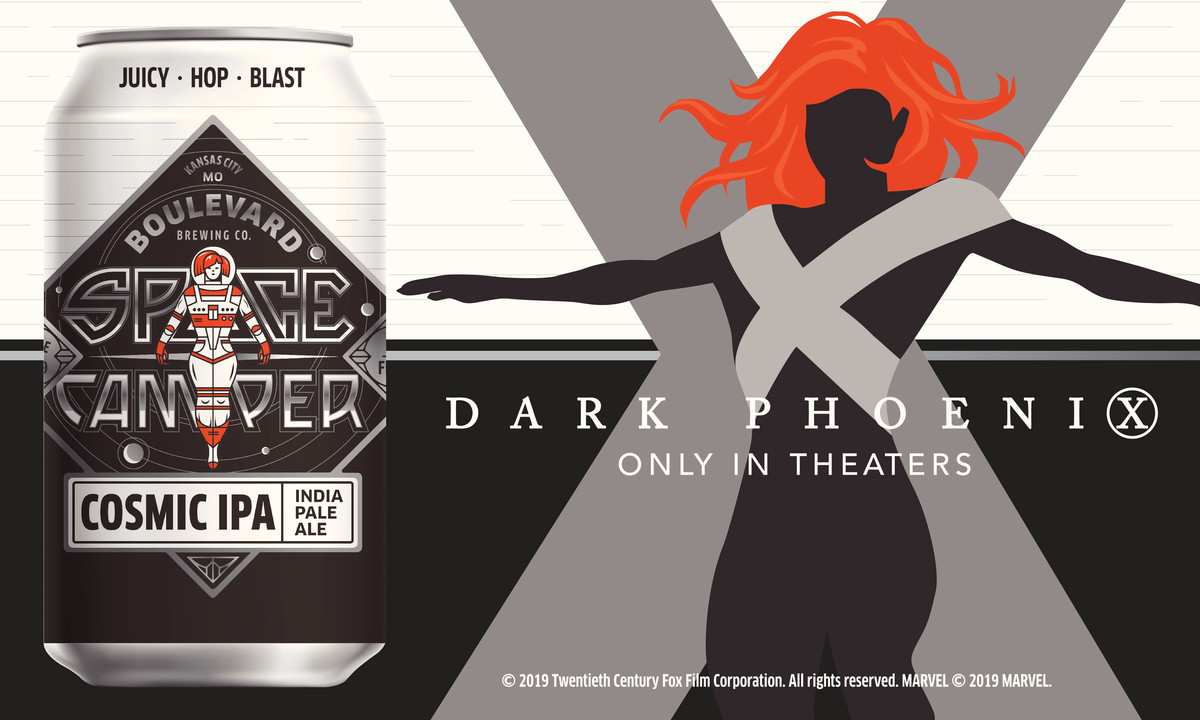 Dark Phoenix is Coming Soon to a Theater Near You

Space Camper’s new limited-edition packaging features a Dark Phoenix icon floating over a prominent “X” with the beer’s orange, grey, white and black branding. In addition to the original six-packs of 12oz cans, Space Camper will be available in single-serve 16oz cans, primarily for venues and events.

Soon fans will also be able to watch the action on the big screen with a Space Camper in hand – a can’t miss X-perience. Starting on May 29, Boulevard’s Space Camper will be the first beer ever to star as an AMC Movie Feature Drink at more than 300 AMC Theatres’ MacGuffins adult beverage concepts. Fandango codes for $3 off Dark Phoenix movie tickets will also be available on Space Camper six-packs nationwide.

“20th Century Fox is thrilled to partner with Boulevard Brewing for the release of Dark Phoenix. Space Camper Cosmic IPA’s heroine is a the story of Jean Grey’s Dark Phoenix,” said Chris Cerbo, SVP of Marketing Partnerships. “Boulevard Brewing has a strong connection with their consumer and we’re looking forward to sharing the film with them in such a unique way.”

“We are proud to have crafted a partnership with 20th Century Fox,” said Natalie Gershon, vice president of marketing for Boulevard Brewing Co. “Our team looks forward to this exciting theatrical release, and many more to come.”

Released in January 2019, Space Camper was inspired by Boulevard’s desire to offer drinkers an escape from heavy-handed bitterness. Bursting with aromas of mango, peach and pineapple, the brew clocks in at 5.9% ABV and 50 IBUs, with flavors of fresh citrus, stone fruit and watermelon from Ekuanot, El Dorado and Galaxy hop varietals. Beyond the beer, Boulevard launched Intergalactic Planetary Attack, a throwback 8-bit video game. Space Camper’s mission:  Save the Earth – The Only Planet With Beer, kicks off with an Arbor Day Foundation partnership and a commitment to plant 10,000 trees in 2019.

In DARK PHOENIX, the X-MEN face their most formidable and powerful foe: one of their own, Jean Grey. During a rescue mission in space, Jean is nearly killed when she is hit by a mysterious cosmic force. Once she returns home, this force not only makes her infinitely more powerful, but far more unstable. Wrestling with this entity inside her, Jean unleashes her powers in ways she can neither comprehend nor contain. With Jean spiraling out of control, and hurting the ones she loves most, she begins to unravel the very fabric that holds the X-Men together. Now, with this family falling apart, they must find a way to unite -- not only to save Jean's soul, but to save our very planet from aliens who wish to weaponize this force and rule the galaxy.

Boulevard Brewing Company is the largest specialty brewer in the Midwest, dedicated to the craft of producing fresh, flavorful beers using traditional ingredients and the best of both old and new brewing techniques. Known for their unsurpassed quality, Boulevard beers are now available in 41 states and 11 countries. For more information, visit boulevard.com or follow us on facebook.com/Boulevard, twitter.com/Boulevard_Beer and instagram.com/boulevard_beer.