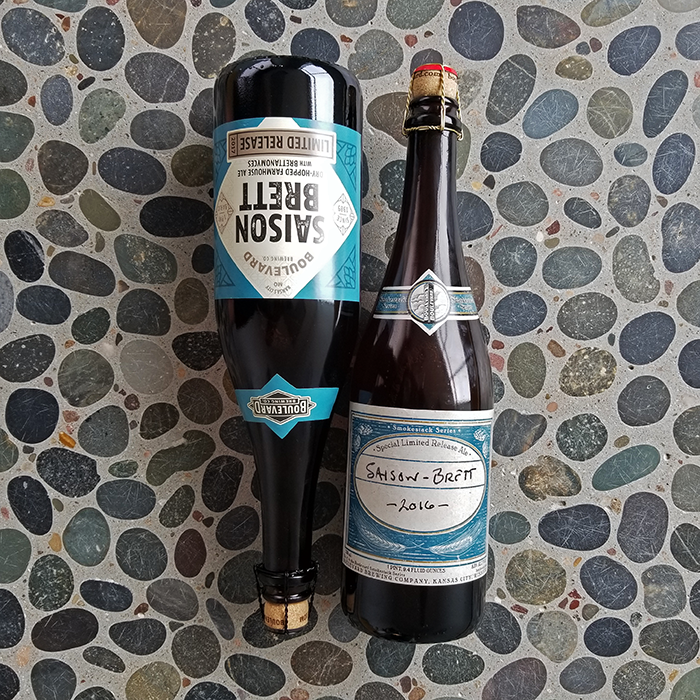 Each summer when we release Saison Brett, a common question emerges, “How long should I age this?” While we give Saison Brett around three months aging time in the bottle conditioning area of our warehouse prior to release to allow brettanomyces time to work its magic, creating the hallmark earthy/funky flavors and aromas for which it’s known, Saison Brett will continue to evolve for several years if stored properly.

Before diving into the effects of aging, let’s discuss what exactly is meant by “stored properly.” In a perfect world, we’d suggest storing Boulevard beers upright in a cool, dark place with a fairly steady temperature. With darkness, you’re looking to avoid UV rays damaging the beer, resulting in skunky off-flavors. Regarding temperature, it’s best to avoid extreme temperature ranges. Going from 55 F to 75 F isn’t a huge concern, but the warmer beer gets, the faster the aging/oxidation process occurs. You never want your bottles to become hot.

Prior to sharing my personal tasting notes, here’s a breakdown of the recipe and process behind the beer:

Yeast/Aging
Saison Brett is pitched with our house Belgian yeast strain for primary fermentation. Following filtration and transport to our off-site Smokestack Series bottling line to avoid introducing wild yeast into our main fermentation cellars, Saison Brett is inoculated with Brettanomyces Bruxellensis in a bottling tank designated to holding funky/sour beers. Champagne yeast (the strain we use for bottle conditioning all Smokestack Series beers) is also added at this time.

After bottling, cases of Saison Brett spend 12+ weeks in the bottle conditioning area of our warehouse at 75 F to allow the brettanomyces time to do its work so that the beer will have pronounced brett character at release. In addition to tasting samples in meetings of our expert tasting panel, our chemist analyzes Saison Brett using a gas chromatograph to measure levels of 4-Ethyphenol and 4-Ethylguaiacol, phenolic compounds that present aromas/flavors of funk/barnyard and clove/spice/smoke respectively.

Following confirmation of brettanomyces characteristics being above the average taster’s threshold, Saison Brett is released to make it out into the world!

The following bottles were stored upright, in cases, at 35 F.

Saison Brett – 2017
With just over 5 months time in the bottle with brettanomyces working its magic, the earthy funk and tropical fruit flavors/aroma contributed by the brett are certainly present, but very much in balance with the grapefruit/citrus from Amarillo hops and the bubblegum/clove notes from our house Belgian yeast.

I absolutely love Saison Brett when it’s relatively fresh as I think it’s at its most complex, which I find very exciting for a beer with such a simple recipe.

Saison Brett – 2016
While I may personally prefer Saison Brett when it’s fresh, the 18 to 24 month mark is also pretty magical. At this point, the hop character has faded a bit allowing spicy phenolic notes and a sort of caramelized pineapple flavor from the brettanomyces to shine. The hops haven’t completely disappeared and still contribute subtle grapefruit/citrus so support the work of brettanomyces. Carbonation has increased to a level approaching effervescent causing the beer to present as light and airy. We joke that we like “fluffy” beers at Boulevard.

Saison Brett – 2015
I can’t explain it, but in bottles near the 30-40 month mark, the hops seem to return to prominence. I don’t know if that’s the brett character seems subdued in this bottle, but the kettle/whirlpool and dry-hopping additions of Amarillo really shine through in a way that they didn’t in the 2016 vintage. The brett character is still very much there, but it’s less about tropical fruit and more about a lingering, funky, earthiness. Most of the esters contributed by our Belgian yeast have faded and this bottle is all about the interaction of hallmark brettanomyces character and Amarillo hops. The carbonation level on the 2015 bottle is quite high, but far from being over carbonated or gushing.

I’ll admit that I’m a little sad that I don’t have many more 2015 bottles stashed away.

Saison Brett – 2014
Wow! The 2014 bottle is a total brett bomb! I could smell a strong earthiness upon opening the bottle that was followed quickly by subtle citrus aromas. Unlike the 2015 bottle that featured a resurgence of Amarillo hops, the 2014 vintage is all about the interplay of brettanomyces and our Belgian yeast. The carbonation is quite high, but again, I wouldn’t say it’s too high and there was no gushing. At this age, 2014 Saison Brett would really rock with an aged washed rind cheese, the sort of cheese that oozes when you look at it sideways. Pair that with some fresh berries and you’re set! This bottle is straight magical!

These are my personal tasting notes and are by no means meant to be authoritative as each bottle of Saison Brett is like a tiny fermenter, capable of many different changes during aging dependent on cellaring conditions.

If you have a vertical of Saison Brett waiting to be popped, give it a go and share your thoughts with us!