Inspired by the success (and selfishly, fun) of our "X" series of special Imperial Stout releases, we've embarked on a journey to the outer reaches of our popular Rye-on-Rye. For the first Rye-on-Rye X release, Rye-on-Rye-on-Rye, we transferred our huge tawny rye ale from its first set of aging barrels into freshly emptied Templeton Rye barrels effectively creating a double barrel aged ale that showcased giant rye whiskey and barrel character. 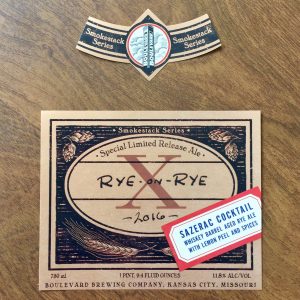 For the second Rye-on-Rye release, we drew inspiration from the famous New Orleans cocktail, the Sazerac. The official recipe is composed of rye whiskey, absinthe or Herbsaint, a sugar cube and bitters all garnished with a lemon peel. To translate this classic cocktail into a beer, we brewed batches of the base rye beer that received spice additions mimicking bitters as well as lemon peel during the boil. The resulting wort was fermented with our house Scottish ale yeast before being aged in freshly emptied Templeton Rye barrels.

Available exclusively in 750 ml bottles, Rye-on-Rye X – Sazerac will be released beginning in the Greater Kansas City Area on July 12th. Cities that normally see our other Smokestack Series Limited Release beers like Bourbon Barrel Quad or Saison-Brett should expect to see Rye-on-Rye X - Sazerac in the coming weeks. Please note that we do not have access to our distributors' delivery schedules and will be unable to confirm when Rye-on-Rye X – Sazerac is available near you.