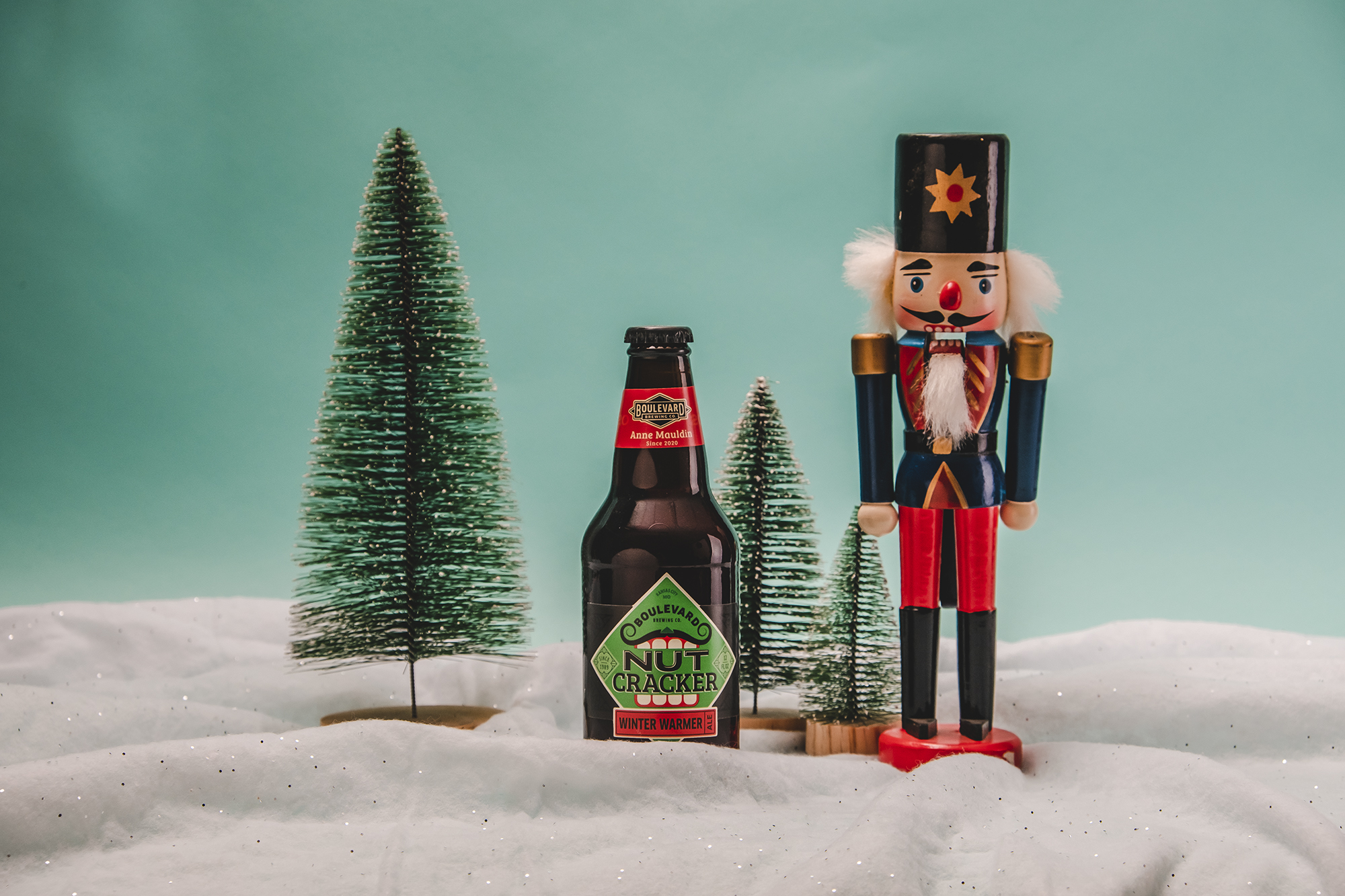 As we’ve done in years past, over the next few weeks we’ll be introducing you to those who work behind the scenes to ensure that your Boulevard experience is top-notch! Just as the clocks fall back, you’ll find our beloved Nutcracker Winter Warmer on shelves with a little beer elf’s name on the neck of the bottle. Each week we’ll feature a Boulevardian that keeps our brewery, well, brewing along! 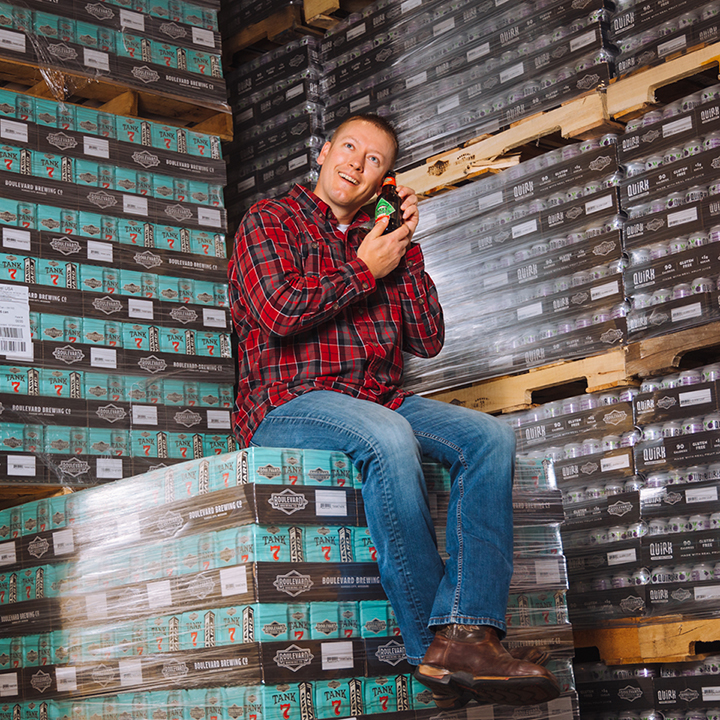 While there is a large tech component to beer, it’s not usually the first thing you think of when envisioning the beer industry. The truth is that, just like many other businesses, a lot of what we do is conducted through computer programming. People like Beau here are behind the scenes every day working in data and coding to make sure that logistically, things get to where they’re going. Which in turn, means you get the freshest beer we’re able to supply. Beau has his hands in sales, logistics, finance, and production. After 8 years at Boulevard, he’s seen a lot of change and growth, and we sure don’t know what we’d do without him and our warehouse team. Beau came to us from the military (he’s full-time here but still a reservist in the military), where he works on the  P-3 Orion and now the P-8 Poseidon for the Navy. In his free time, he likes to shoot his bow, fish, cook, and spend time with his family.

Next time you’re enjoying a BLVD beverage in a bar, restaurant, or on your kegerator, go ahead and toast Beau for getting it to you! We’re lucky to have such a great Boulevardian on our team.

Megan is known around here for her big smile, dedication, and self-motivation. She has been with Boulevard for six years, getting her start 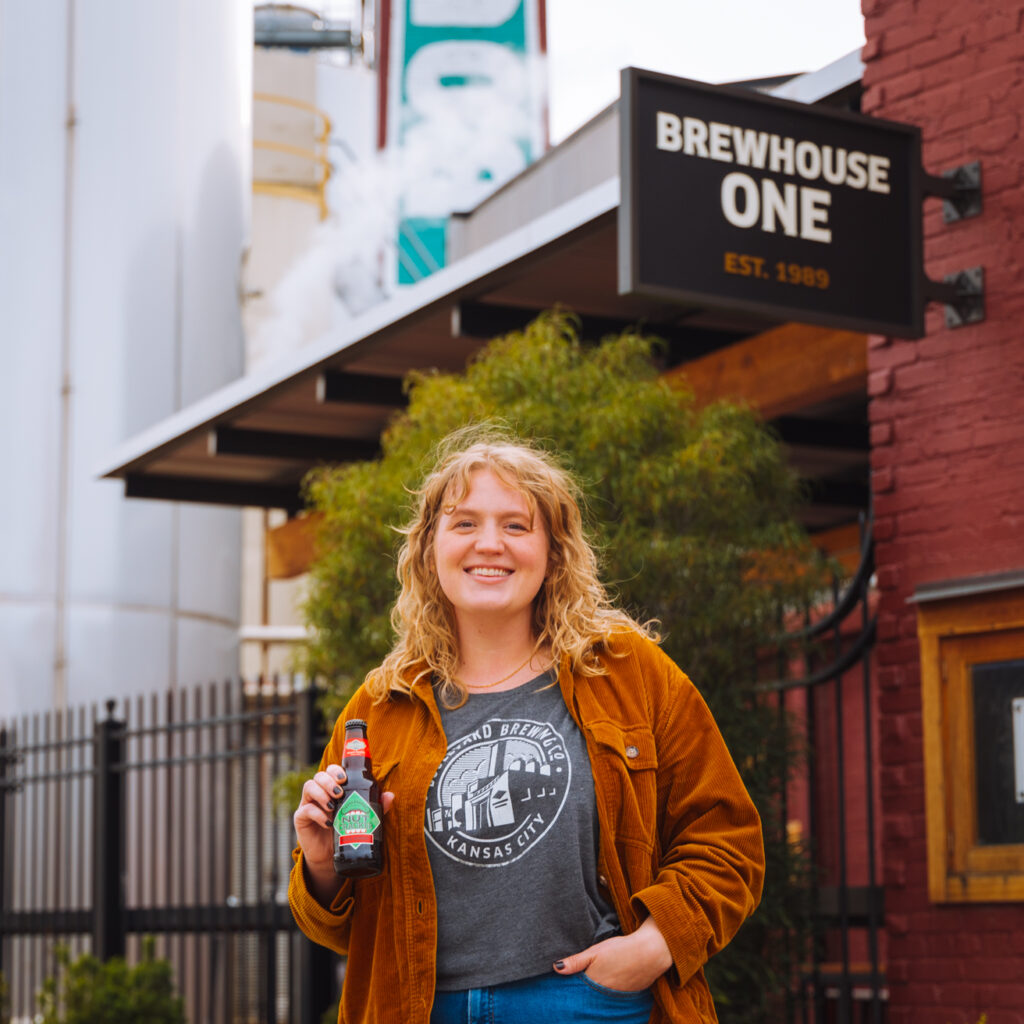 giving tours in our original tasting room before Tours & Rec became a reality, and helping us transfer over to that building. Last year she made the move up to our Logistics team, supporting both the West and Midwest divisions in getting beer where it needs to go, which is not as easy as it sounds. But it did give her the chance to learn some new party tricks – like knowing exactly how much a pallet of beer weighs.  In 2017 back when she was doing tours 5 days a week, 4 times a day, one of her favorite memories is the solar eclipse tour. That day it had been raining and called for rain all day, but luckily it cleared up for the amount of time that the group needed to climb up on the roof and watch the one-and-a-half minutes of near totality. If she wasn’t in beer she’d be an astronaut. She does a lot of hiking and camping where she practices eating freeze-dried fruits for space.

Megan has lived her whole life in Kansas City, minus four years getting her biology degree at Mizzou. She was interested at working at Boulevard because 1) beer, 2) science, and 3) people. Working here gave her the knowledge of the science behind beer, but what kept her going was the art and craft a brewer is able to express with tools like yeast, hops, and adjuncts. And what comes from all that is connection, friendship, and community. Thank you Megan, for being one of our favorite Boulevardians! If you see her around, give her a high five for filling your local watering holes. 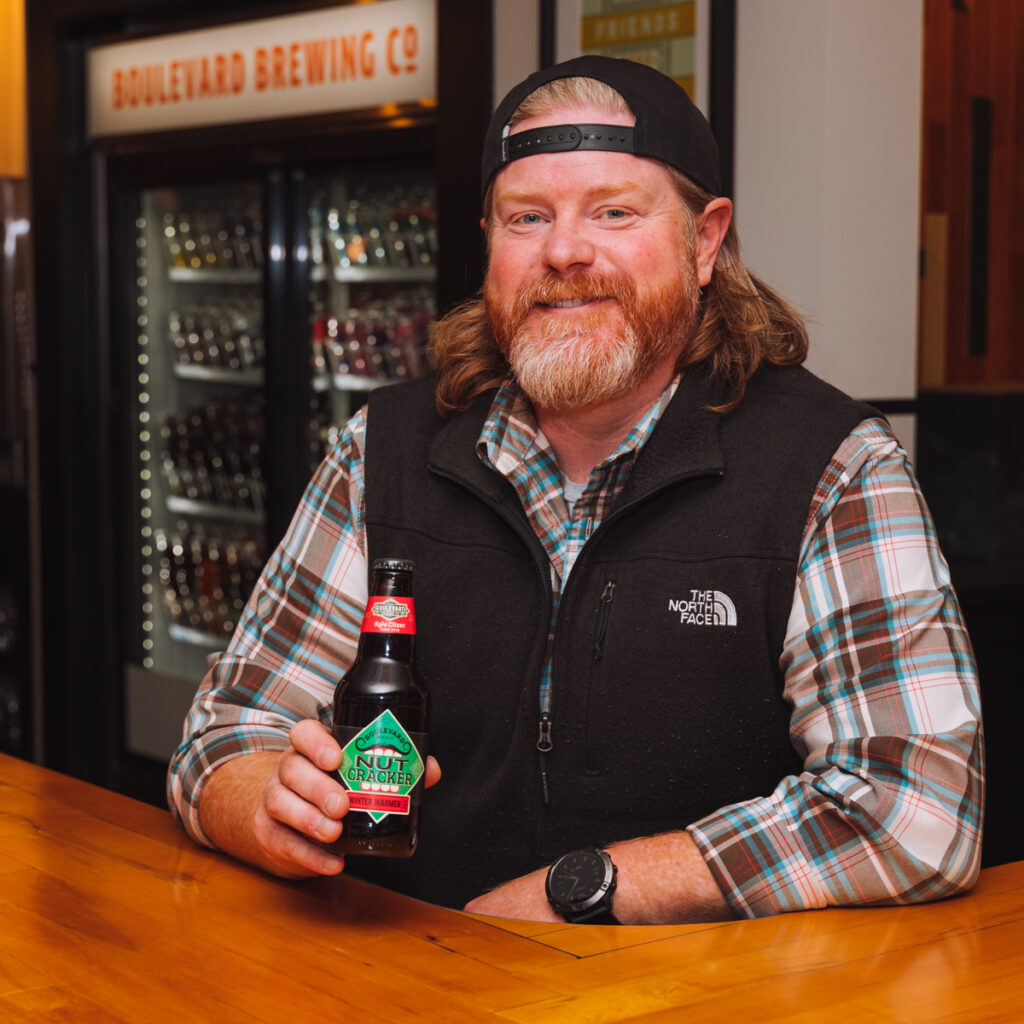 Our people on the front lines: the sales team. They stretch across the country, but our biggest team is right here in Kansas City, led by none other than Kyle Clizer - KC Market Manager. Sales is much more than just punching numbers and distributing new sales sheets, it’s building displays, coordinating events, and forming a community. Kyle keeps a strong connection with our local distributor Central States Beverage (CSB) and works closely with retail accounts to make sure they have the tools and education they need to sell Boulevard beers and beverages to the best of their ability. Kyle has spent four years with us but a total of nearly 15 years in the business – from driving trucks to working in distribution, selling for other breweries, and finally home to Boulevard. He has many great memories from working here, but his favorite story to tell is meeting his wife in a distributor meeting at Boulevard when they both worked for CSB. It took him a year to ask her out but they’ve been together ever since and have three wonderful boys together.

Kyle’s community-minded and friendly personality is what makes him a great asset to our team and a leader for our Kansas City crew. Thank you for keeping KC stocked and looking good, Kyle! 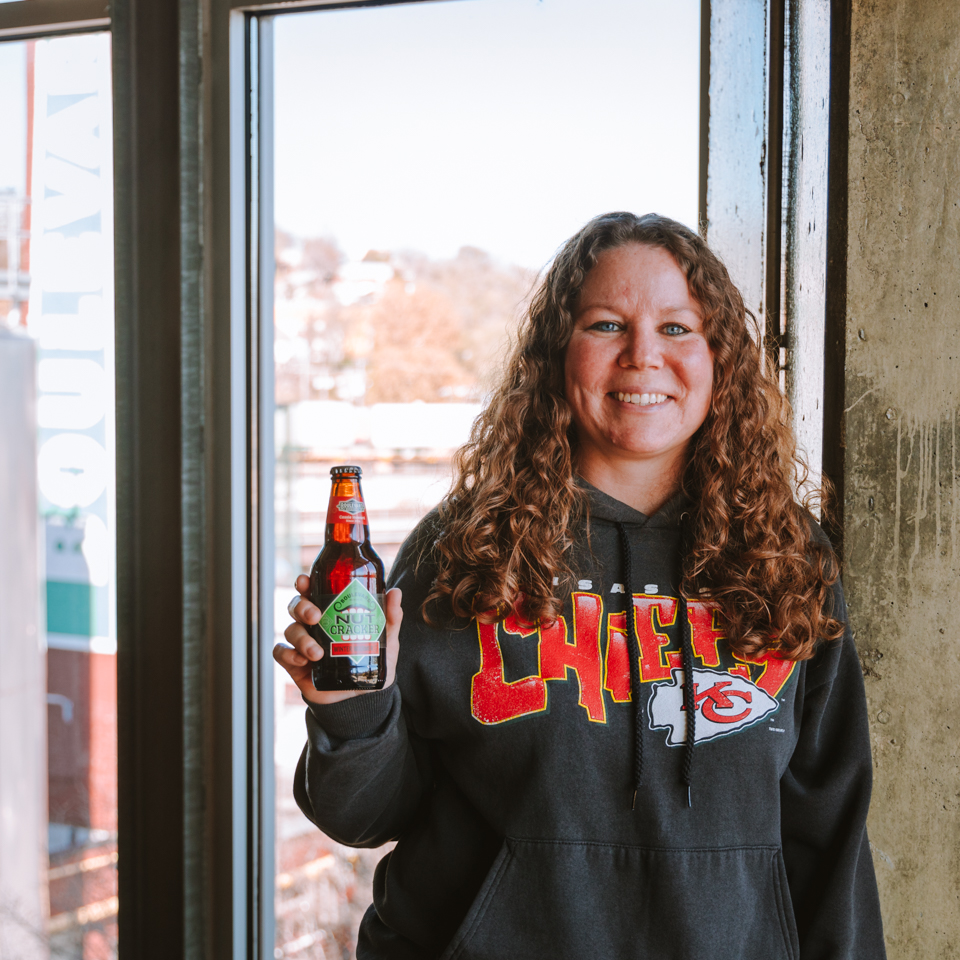 Crunching numbers isn’t necessarily the most glamorous thing you might envision about working at a brewery, but as finance team member Cassie says, she works for beer thirty. Cassie has been with Boulevard for six years, and has a lot of great memories and close friends from the day-to-day banter and shared beers after hours. Her favorite memory is when the Tours & Recreation building opened and she got to feel the excitement and support from our community. Being behind the computer for most of the time, it can be difficult to step back and remind yourself how beer brings people together.

She’s an important part of that process because even when we don’t want to think about it, everything we do costs money. Bottles, labels, malt, hops, water, electricity, safety glasses, caustic. When she’s not balancing spreadsheets, paying bills, or creeping on the bottling line running behind her desk, Cassie enjoys watching football and spending time with her family and fur kids. She’s a beer elf that deserves all the thanks this year, so if you see her around greet her with a cheer!

It’s never too late to change your career – which is just what brewer/filtration specialist David Hartman did. After 24 years in the United States Air Force, he went back to school at St. Louis University for his certificate in Brewing Science & Operations. He retired from the Air Force while living in South Dakota and even started his brewing career at Zymurcracy Beer Company. A long-time friend convinced him and his wife to consider Kansas City for relocation, but he was concerned it’d be too large after growing up in small town Illinois and then spending so much time in South Dakota. Since making the move, however, he’s changed his tune. He says Kansas City has been incredible and feels like a great community.

When he was going through his sensory class for his brewing science degree, they used Tank 7 as a standard for the American Saison. Now he’s getting to brew that beer, and is excited to be part of the team making this world-class beer. The Hartman family is new to the area, so let’s give them a great KC welcome!