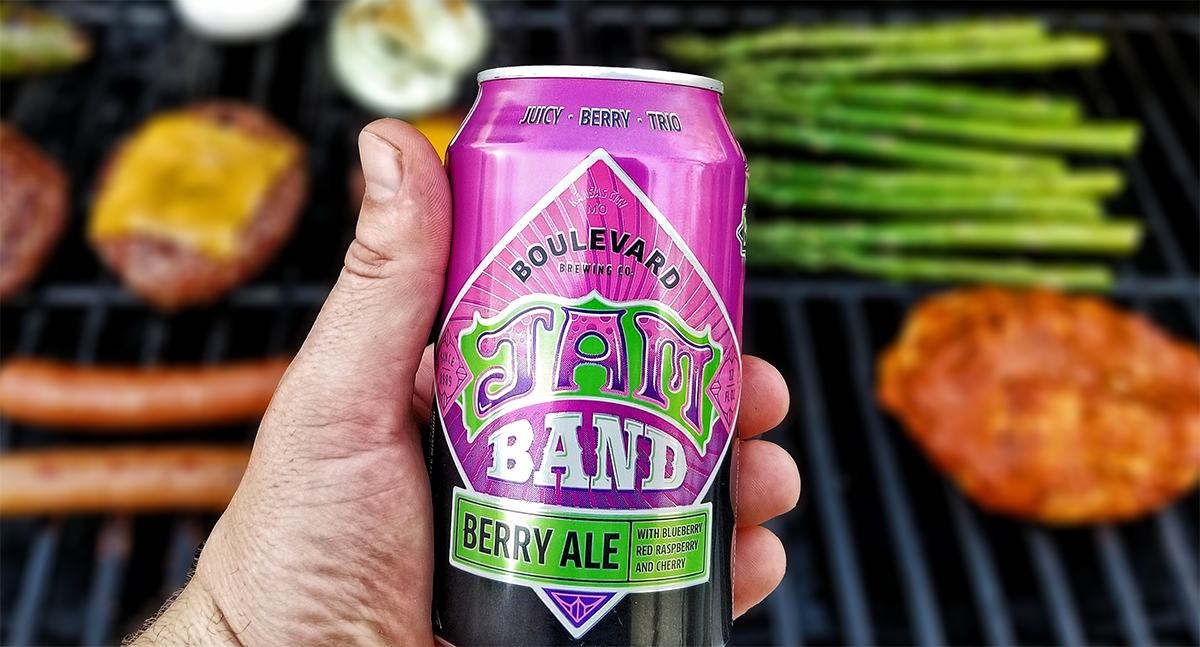 As Labor Day weekend approaches, backyards around the country brace themselves for bustling activity and grillmasters plot their menus for what's often considered the swan song of summer cookouts. But before you light the charcoal, turn on that propane tank, or even mix up a marinade, you need to make sure that your meat will be properly accompanied. Specifically, with Boulevard beer. Need some assistance to make sure you're properly pairing your fire-kissed masterpieces with the right beers to create a perfectly complementary pop of flavor? We got you. Check out these quick and easy grilled food and beer pairings, and prepare for the inevitable onslaught of comments lauding your grill skill.

Apples might be the fruit most commonly paired up with pork chops, but trust us when we say that the blend of blueberry, tart cherry and raspberry in our Jam Band Berry Ale is a pretty sweet (pun kind of intended) direction to take too. A spice-rubbed chop with cayenne and smoked paprika will balance out the fruit-forward beer, or go all-in and make a raspberry balsamic glaze for your pork that will boost the berry flavor to new levels.

There's a beautiful simplicity in the combination of beer and brats/hot dogs/sausage. It's a no frills pairing that withstands the test of time and has sated appetites at cookouts, tailgates and ballgames for decades. And our original Pale Ale, which has been around for nearly three decades itself, is a perfectly suited match in this classic duo. The rich maltiness of the Pale Ale is strong enough to stand up to the fatty flavor of sausage, while the moderate hop profile lends a hand in helping to make the meat's spices pop. Want to really go the extra mile? Boil your brats or sausages in Pale Ale before throwing them on the grill. *chef's kiss*

Tank 7 pairs extraordinarily well with...well, just about everything, honestly. If we had to direct you to ONE beer to pick for your grilling extravaganza, this would be it. Its complex flavor profile makes it a remarkable companion to a wide variety of dishes. But for now, we're going to focus on one item it's especially great with: burgers. Peppery notes complement the fatty, umami flavors of the beef patty and the beer's dry effervescence cuts through the savory meat, helping to cleanse your palate. No matter how you dress your burger, loaded up with toppings or just a simple slice of cheese, Tank 7 is ready and able to help every bite feel like an indulgence.

In this pairing, citrus is both parties' best friend. Much like lemon is a seemingly omnipresent component in seafood dishes, lemon wedges have become an almost automatic garnish for Unfiltered Wheat Beer throughout its history. Whether it's shrimp, salmon, scallops or some other delicacy from the sea hitting your grill, hitting it with a healthy dose of lemon juice and serving it with an Unfiltered Wheat Beer is a surefire union. With a natural citrusy flavor and slightly sweet, bready malt profile, Unfiltered Wheat melds beautifully with the distinct flavor of fish and provides a secondary base for the acidity contributed by the lemon. Go on, squeeze another lemon into your Wheat, too. Or don't. It's all good. You do you.

CHICKEN AND THE CALLING DOUBLE IPA

Chicken lends itself to a crazy variety of preparation options, and the crazy amount of hops in The Calling Double IPA offers up a delicious (and unexpected) wallop of tropical fruit flavors. Whether your style is Buffalo, Thai, Jamaican jerk, pollo asado, or otherwise, drinking The Calling with your grilled chicken dish can help those spices pop and provide a light and slightly sweet counterpoint to the heat without being too bitter or overpowering.

A nice cut of steak is the status symbol of the grilling world, if not the food world in general. Similarly, there's something that makes you feel a little extra fancy when you're holding a tulip glass filled with a dark, decadent imperial stout aged in whiskey barrels. Unite them during your get together for a luxurious pairing that will make everyone feel like they've just won the lottery. The caramel, chocolate, and espresso notes from Whiskey Barrel Stout marry wonderfully with the rich flavor of beef, but aren't cloying or heavy. You may not have a million bucks, but at least you can feel like it with this combo.