Beginning over 2,000 years ago, it was common to ferment and store beer in wooden casks. As more impervious and sanitary materials become available to brewers throughout the years, oak took a backseat to copper and then stainless steel vessels. While it’s certainly true that brewers focused more on the long-steeped traditions of their specific regions, Belgian Lambic brewing being a primary example, continued to and still do employ oak in many facets of the production of their beers, stainless steel cylindroconical tanks are the most common vessels used by modern commercial brewers for primary fermentation and maturation of most beers.

It wasn’t until the early 90s that American craft brewers returned to these roots and began utilizing oak barrels previously used to age spirits and wine in secondary fermentation and aging of their beers. Given that our brewery resides in the state that produces the most white oak in the country (and we love the influence whiskey and wine can impart), it’s only natural that our barrel library has steadily grown to be one of the largest in the nation following our first barrel-aged release, the inaugural batch of Bourbon Barrel Quad, in 2008.

When discussing our barrel collection, we divide it into two distinct groups: “clean barrels” and our sour program. Clean barrels are used as is from the distilleries to impart character from the spirit or wine that previously inhabited the barrels. Casks in our sour program are typically used once or twice as clean barrels before receiving a “promotion” to the funky side of things. At this point, we inoculate the barrels with mixed cultures, predominantly featuring strains of lactobacillus and brettanomyces.

As mentioned above, our first commercial release from the spirit/whiskey portion of our barrel program was Bourbon Barrel Quad in mid-2008. Based loosely on The Sixth Glass, our Belgian-style quardrupel ale, BBQ (as it’s affectionately known to Boulevard fans) is aged in a blend of first and second use whiskey barrels from a variety of our favorite distillers. As the beer ages and the angel’s share is lost to the oak and evaporation, barrels are topped up with fresh beer and/or tart cherries. This minimizes headspace in the barrels slowing the oxidation process and contributes complexity and a subtle tartness in barrels that receive cherries. Following an aging period of six to eighteen months, optimal barrels are blended to create each release of Bourbon Barrel Quad. Every step of the process from receipt of the barrels through filling, topping up, blending and rinsing before refilling is performed by hand (as there’s simply no other way to do it) by a dedicated crew of brewers who focus solely on our barrel aging efforts. 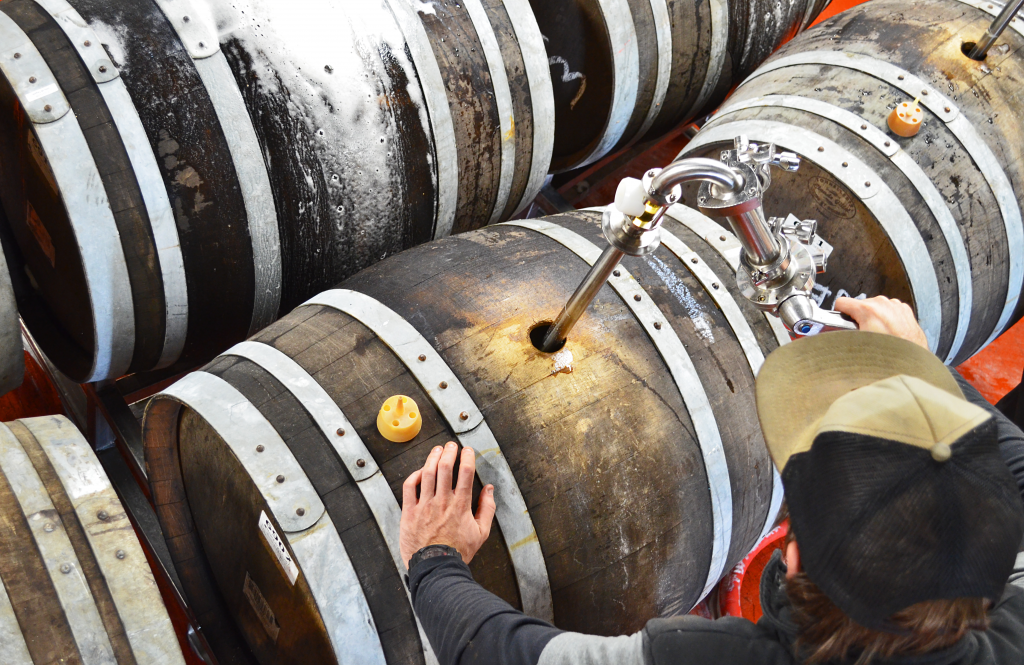 In the early days of our barrel program, the responsibility of handling barrels was passed around the brewing team in a rotational manner depending on who had extra time, but now that we’ve gone all in on barrel aging with the transition of Bourbon Barrel Quad and the addition of Whiskey Barrel Stout as year-round beers, it’s become necessary to create a sub-department of our brewing team that dedicates 100% focus to shepherding beers through our barrel-aging program. Helmed by Ryan McNeive, Lead Brewer of Barrel-Aging, our barrel team works closely with our production scheduler, brewers, cellarmen and filtration crew to organize and execute an approach to barrel-aging beer that not only results in us producing the best beer we’re able, but in a manner that aligns nicely with our brewing and production schedule.

The challenge of producing a great barrel-aged beer, of any style, is that it’s tough to accurately predict when the beer will be ready. With a beer like Unfiltered Wheat Beer, one that we’ve brewed and packaged thousands of times, the process is fairly uniform so we know that seven days after brewing, a batch of Unfiltered Wheat Beer will be ready to bottle. With beers whose processes stretch out over the course of several months with added variables such as temperature, rate of extraction of oak/spirit character and maturation time, it becomes important, nay crucial, to listen to the beer. This isn’t to suggest that we exercise zero control over the process of barrel aging, but it becomes the duty of our barrel crew to taste beer (tough gig) several times (feeling pity for them yet?) during the aging process to know what the barrels and beer need as they develop and mature. With the introduction of souring microbes, the level of communication required becomes greater. In the first stages of the journey towards becoming a beautifully balanced tart/sour beer, there’s a bit of an ugly duckling phase during which the beer is definitely not something we’d share with friends we’re looking to impress. Trusting our methods and the microbes we employ, we allow each batch or lot of barrels to develop as it will, all the while tasting and waiting for the beer to tell us when it’s ready.

All told, we’ll spend anywhere from 180 days to five years to create a single batch of one of our barrel-aged beers whether it’s Bourbon Barrel Quad, Whiskey Barrel Stout, Rye on Rye or a Love Child blend. The work is time consuming, costly, tedious and laborious, but with results that are so damned delicious, we feel it’s worth it.