Fall 2016 brings another rotation to our Sample Twelve pack featuring two year-round beers and two brand new beers from our Tasting Room. Created to allow our brewers the chance to experiment with new styles and recipes, the line of Tasting Room beers also gives Boulevard fans the chance to try beers that were previously only available in our Tasting Room. Joining year-round favorites 80-Acre Hoppy Wheat Beer and Pale Ale will be Milk Stout and Rosemary IPA. 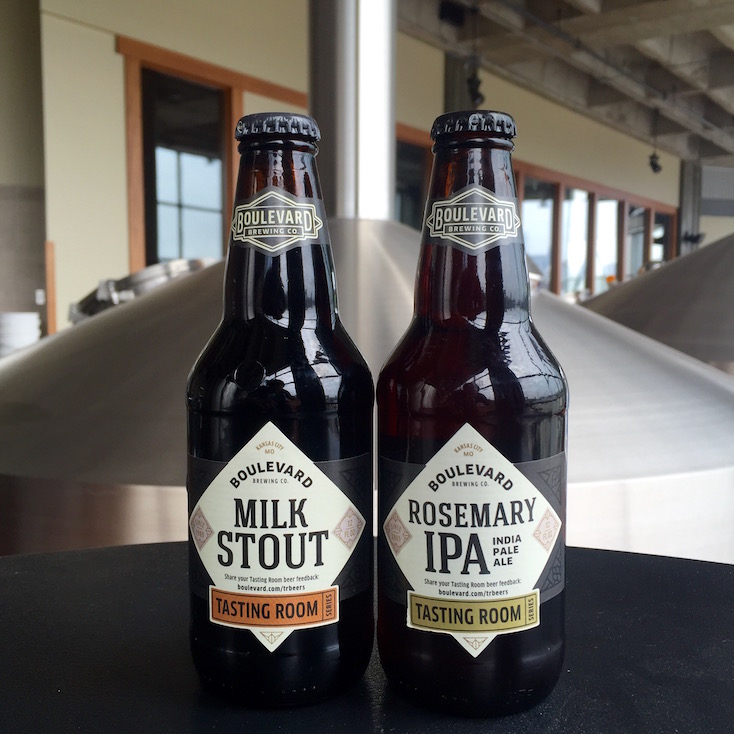 Suited for a much welcomed break in the heat, Milk Stout features layers of caramel and chocolate malt complexity provided by Cara 120, Cara 300 and Patagonia Black Pearl. The addition of rolled oats in the mash tun and lactose, commonly referred to as milk sugar, in the wort kettle lend a round, silky mouthfeel to the beer. Subtle hopping with Bravo and Cascade creates just enough bitterness to prevent the beer from being overly cloying. Deep black in color, Tasting Room – Milk Stout opens with aromas of bittersweet chocolate, espresso and toffee that transition to flavors of the same. The addition of lactose, a non-fermentable sugar, works with the rolled oats to deliver a creamy, lingering finish. Tasting Room – Milk Stout is 5.5% ABV and 12 IBUs.

Inspired by a beer from Cerveza Granizo tasted during a judging session in Chile, Boulevard Brewmaster Steven Pauwels became intrigued with the idea of using rosemary in a hop forward beer to explore the interaction between bright herbaceous/savory flavors and punchy/fruity hops. Tasting Room – Rosemary IPA is best categorized as a Red IPA as the malt bill is composed of pale malt, Amber 50, Midnight Wheat and melanoidin malt. Hopped with Chinook, Simcoe, Citra and Cascade the beer features spicy, citrusy hop notes in both aroma and flavor. Rosemary leaves are steeped in the wort at the end of the boil during the whirlpooling step. Upon pouring, Tasting Room – Rosemary IPA has a huge rosemary aroma that melds with spicy, grassy hop notes. With just a touch of caramel malt character, the beer walks a fine balance between sweet malt character, piney hops and savory rosemary. Tasting Room – Rosemary IPA is 6% ABV and 59 IBUs.

Tasting Room – Milk Stout and Rosemary IPA will be available exclusively in our Sample Twelve pack and on draft in our newly opened Tours & Recreation Center. A few kegs might make it out for special events and festivals, but you shouldn’t expect to see these beers as a regular draft in bars and restaurants.

As always with our Tasting Room beers, we’re interested in hearing what you have to say. Drink these beers and provide feedback.