The first new beer you’ll see from Boulevard Brewing Company in 2016 is Early Riser Coffee Porter. Born from friendship and a mutual love of beer, bikes, and coffee, Early Riser features Colombian Cauca Cajibio Estate custom roasted and ground at Maps Coffee Roasters by Vincent Rodriguez and a small army of his friends and family. 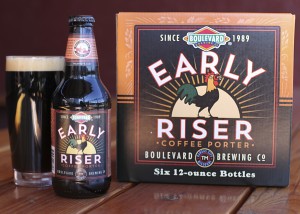 The story of Early Riser Coffee Porter begins with Lead Brewers Dustin Jamison and Joshua Keithly frequenting and later riding for Velo + in Lenexa, Kansas. The bike shop, owned and operated by Vincent Rodriguez, also houses a coffee roasting operation. Nearly a year ago, Dustin approached Vincent about the idea of working together on a coffee beer. At the time, Maps wasn’t outfitted with a large enough coffee roaster to undertake the project, but after acquiring a Loring SmartRoaster, Vincent felt ready to begin the project.

Starting with several cupping sessions with folks from our brewing and lab crews, a base beer recipe was created that would showcase the chocolate, toffee, honey, and golden raisin notes imparted by the Colombian coffee sourced locally through Midwest Coffee Trading in Gardner, Kansas. While building the recipe and selecting the appropriate coffee weren’t necessarily easy, the hard work began when it was time to roast and grind the coffee. Vincent purchased and refurbished three commercial grinders to handle the task of grinding 2,800 pounds of coffee to net the required 2,400 pounds.

A crew of 70 friends and family was assembled and divided into three roles: grinders, portioners, and the ever glamorous clean up crew. They worked in two shifts over the course of three nights to package 240 bags each containing ten pounds of coffee. On the day of delivery, Vincent assisted Dustin and Joshua along with a crew of Boulevardians in suspending the freshly ground coffee in porous bags in our stainless steel fermentation vessels. Once the coffee was in place, our brewers transferred finished porter into the tanks for a 48 hour extraction period. Since we were dealing with finished beer that was chilled, the extraction mimicked the process employed for brewing cold brewed or toddy coffee. The lower temperature results in an extraction of beautiful flavor and aroma from oils in the coffee without the acidity associated with a typical brew. 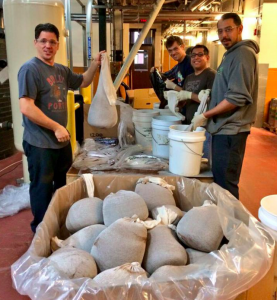 At 5.2 ABV and 28 IBU, Early Riser Coffee Porter features a blend of pale, caramel and chocolate malts with just a touch of wheat to form a round, smooth bodied beer with notes of coffee and chocolate that elevate rather than overpowering the beautiful coffee supplied by our friend Vincent. Hopping with Magnum and Bravo is limited to the beginning of the boil to provide just enough bitterness to balance out the sweetness of the malt. The coffee is, as it should be, the star of the beer as it shines in the flavor and aroma.

We hope you enjoy drinking Early Riser Coffee Porter nearly as much as we’ve enjoyed the process.