2015 will see us release riffs on our Smokestack Series Limited Release Imperial Stout. As a base beer, Imperial Stout serves as a ridiculously sturdy starting point for layering flavors by incorporating new ingredients or barrel aging methods. Imperial Stout has a huge grain bill featuring several types of malted barley, wheat, rye, oats, and spelt. Robust grain and chocolate/coffee flavors are counterbalanced by date and plum notes from Scottish yeast.

The second installment, Imperial Stout X – Aztec Chocolate, takes inspiration from traditional drinking chocolate referred to as Xocoatl. The ancient Aztecs held chocolate in such high regard that in addition to its place as a holy drink in ceremonies, cacao beans were a form of currency. Accounts vary, but the drinking chocolate the Aztecs consumed combined a paste of cacao beans with spices, chili peppers, vanilla and in some cases, wine or another fermented spirit. 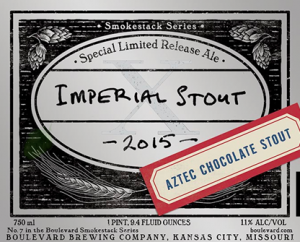 To bring our interpretation to life, a batch of Imperial Stout was brewed that received freshly ground cinnamon during the boil on the brewhouse. This batch will be blended with tanks of Imperial Stout that are infused with dried pasilla negro and ancho chiles as well as cacao nibs. The chiles and cacao nibs were stuffed into porous bags and suspended in sanitized stainless steel tanks. Finished beer is transferred onto the chiles and nibs and allowed to rest for 24 hours of contact time. Following the infusion, the beer is transferred to a blending tank and blended with the cinnamon spiced batch. No portion of Imperial Stout X – Aztec Chocolate is barrel aged.

As of this minute, we’re targeting a June release date and hope to share a specific date as we get closer.