It’s often said that brewers brew the beers they’d like to drink and hope that beer drinkers embrace them. We take that approach at Boulevard Brewing Company, but we also depend heavily on the feedback we receive from you, our loyal fans. Lately, the message, “We want Boulevard cans!” has been heard loud and clear. To this end, we’re excited to share with you that we’re currently in the planning stages of bringing canned Boulevard beer to reality in 2015.

Brewery leadership is finalizing details right now, but it’s our goal to release the following beers in six packs of 12 ounce cans: 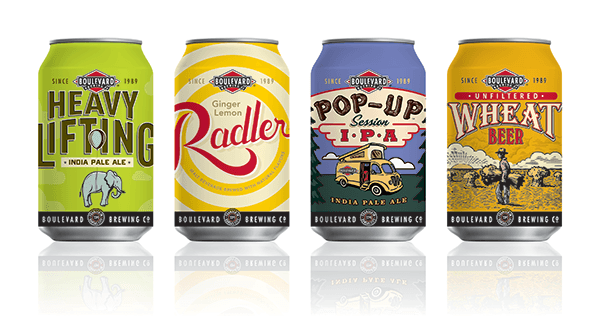 You’re likely familiar with Unfiltered Wheat Beer, Pop-Up IPA, and Ginger Lemon Radler and we hope you’re very excited to be able to enjoy these beers in places normally not accessible to glass bottles.

New to the lineup is Heavy Lifting IPA. Based on the wildly successful Tasting Room beer, Mid-Coast IPA, Heavy Lifting joins the family as a year-round offering available in both cans and on draft. Think of Heavy Lifting as a close cousin to Mid-Coast IPA. Coming in at 6.2% ABV and 80+ IBUs, Heavy Lifting features massive late and dry-hopping with Centennial, Amarillo, Topaz and Citra hops that leap from a minimal malt base composed of our base pale malt and a touch of Munich malt.

While some details are in the process of being finalized, we were just too excited to keep this news to ourselves any longer. Stay tuned in the coming weeks as we hope to share more specifics with you.

Since our initial canning announcement, we've received a lot of questions and have compiled the most popular along with a few key points we'd like to discuss in the following FAQ. We'll share more information in the coming weeks as we finalize more details.

Boulevard once said that they’d never put beer in cans. What gives?

We’ve been around for over 25 years and we’ve seen a lot of changes in the beer industry including amazing advances in canning technology. Think about things that you said you’d never do ten years ago. Evolution of our brewery is super important.

Will cans be available year-round?

Which markets will receive cans?

Cans will be made available throughout our distribution network of 30 states and Washington DC.

Do cans negatively impact the flavor of beer?

No. Advances in canning technology in recent years have resulted in a can that does not impact the flavor of the beer inside. As with our bottled beers, we still recommend enjoying them in a glass for the best experience.

What materials are present in the lining of the can?

“Almost all aluminum and steel beverage and food cans use epoxy-based coatings as a barrier between the metal and the products in the can. These coatings have been used in cans for decades. Epoxy-based coatings utilize BPA in the adhesive that attaches the coating to the can.”

I’ve heard that cans are actually better for beer? Is this true? In what ways?

Cans are completely impervious to light. This means that harmful UV rays won’t ever have the chance to interact with and degrade hop compounds resulting in skunky flavors and aromas.

They will not. Our cans will be topped/seamed with a standard can top.

Are you installing a canning line?

We plan to install a canning line at some point after the completion of our current Cellar 5 expansion project, but will not have one at the time we begin to release cans. Until this happens, we’ve entered into an agreement with Third Street Brewhouse in Cold Spring, Minnesota to brew and package our beer using their equipment.

Wait…Boulevard isn’t even brewing this beer?
Will the process be any different for canned beers?

While the canned beers will initially be brewed, fermented and packaged at Third Street Brewhouse in Cold Spring, Minnesota, our brewing and quality teams will be working closely with their crew to ensure our beers are produced in the same exacting, quality obsessed manner we employ in Kansas City. It’s worth noting that our yeast strain and raw materials will be utilized in the production of our beers in Cold Spring.

Are there any other craft breweries operating in a similar situation?

Definitely. Some of the breweries we have tremendous respect for brew and package a portion of their beer at a different location. Some quick research will reveal that some highly regarded beers are brewed and packaged in this manner.

Why aren’t you canning (MY FAVORITE BEER EVER)?

Canning is a learning process for us, so we chose a path to get started slowly to allow us to build as we go. While we think a can of Pale Ale or Hibiscus Gose sounds great on a warm summer day, the initial four beers were selected based on timing, opportunity and interest. That doesn’t mean we won’t add additional beer or make substitutions later, so feel free to keep sending us your requests.

Will you still bottle the beers that are in cans?

Will you continue to produce the aluminum bottles of Unfiltered Wheat Beer?

No. After cans are released, Unfiltered Wheat Beer will no longer be produced in 16 ounce aluminum bottles.

Will the beer be can conditioned?

No. While it is possible to can condition beer, our cans will not be can conditioned. We haven’t completely written the idea off for sometime down the road.

Won’t that make the beer taste different than the bottled versions we’ve come to love?

The yeast strain we employ with our bottle conditioned beers results in quite minimal flavor contribution so you shouldn’t expect a different experience with our canned beers as compared to draft or bottled versions.

Will you expand the can lineup?

Maybe? We’re so new to the whole canning thing that we can’t say for sure. We have no doubt that cans of Boulevard beer will be successful, but we’re just not ready to commit to adding other beers to the lineup yet.

Who designed the cans?

Cans are cool and all, but I can’t reuse them for my homebrew.

Sorry, you can’t, unless you’re really clever and have figured out something we haven’t. We’d love to see any innovations you come up with as we try to learn something new every day.

Cans are an abomination!

That’s really dramatic. We understand that a certain stigma exists with cans, but trust us, we’d never ever agree to do anything that could potentially damage the integrity of our beer. We care about our beer (and you) too much to let that happen.