The craft brewing industry is unique for several reasons, but one of our favorite aspects of craft beer is the friendly working relationship we have with our beer brothers and sisters from other breweries. Back in June, we hosted the inaugural Boulevardia festival celebrating beer, food, music, sustainability, and beer. One of the centerpieces of the festival was Taps & Tastes, an invitational beer festival that gathered our favorite beer people. Breweries from Maine to California (and pretty much everywhere in between) converged on Kansas City in the name of sharing great beer with the people of Kansas City. Will Meyers and Jay Sullivan from Cambridge Brewing Company in Cambridge, Massachusetts, were among the 40 plus breweries in attendance.

Will Meyers, CBC’s brewmaster, has been brewing professionally for over 20 years and has become an authority on brewing with herbs/spices and other non-traditional ingredients. When he approached us about brewing a collaboration beer while he was in Kansas City for Boulevardia, we immediately accepted. Having known Will (and his beers) for several years, we weren’t surprised when he suggested a less than conventional beer. Described quite loosely as a low ABV, sour rustic blonde with spices, Za’Tart is the beer that resulted from our collaboration. 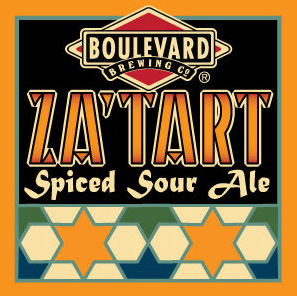 Using a malt bill of pale malt, buckwheat, spelt, and rye, we mashed in the first batch of Za’Tart two days in advance of CBC’s visit. We lautered the wort off the grain and inoculated with our house lactobacillus culture to sour the wort on the brewhouse. Once the desired acidity was reached, we boiled the wort like we would with any other beer. Near the end of the boil, we spiced the wort with Za’atar, a somewhat generic name for a family of related Middle-eastern herbs. Our particular blend contained oregano, thyme, and sumac. The resulting wort was then fermented with Cambridge Brewing Company’s house Belgian yeast strain. One more batch of Za’Tart was brewed without the brewhouse souring process and blended with the sour batch to create a nice balance of pleasing acidity.

Za’Tart, which will only be available in kegs in the Greater Kansas City Area, pours a light golden color with a white head of foam. The spices are evident in the aroma alongside tart, lemony citrus notes. The Za’atar presents in the flavor, but in a very subtle way that makes it appropriate to refer to Za’Tart as a beer brewed with spices, but not necessarily a spiced beer. The finish is crisp and dry with a lingering lactic acidity that begs for another sip.