Hibiscus Gose, our second Backroads Beer, begins hitting shelves in the Kansas City area this week. A revival of a Boulevard employee holiday beer from a couple years back, Hibiscus Gose is our take on a traditional German style of low alcohol, sour wheat beer. It's very important to note that this beer is a gose, not a gueuze which is a blend of Belgian lambic beers. 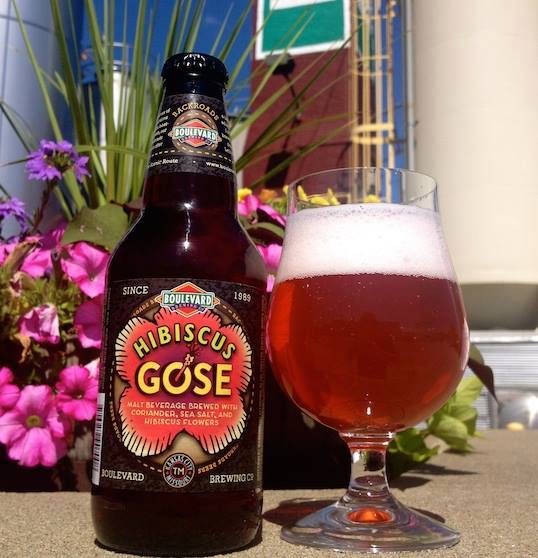 The somewhat obscure style of gose is seeing a return to prominence in American craft brewing as brewers seek to brew lower ABV beers with intense flavors. The style of gose was born in the German town of Goslar although it has become most closely associated with the town of Leipzig where it became more popular. Stylistically speaking, a gose is composed of a malt bill featuring a large percentage of malted wheat combined with pilsner malt. To mimic the somewhat salty water of the region in which gose was born, we added sea salt during the boil as well as coriander, a spice which would have been used in original interpretations of the style. We use the process of brewhouse souring to acidify the wort before boiling. To accomplish this, we lauter the wort off of the grain and inoculate with our house strain of lactobacillus. Once the wort has dropped to the desired pH, 3.6 in this case, we boil the beer as though it were a normal batch of beer. Near the end of the brewing process, during whirlpooling, we infuse the wort with dried hibiscus flowers while it rests in the whirlpool vessel waiting to be cooled and transferred to a fermenter. This addition of hibiscus flowers infuses a vibrant pink hue and a slight citrus/cherry flavor and aroma.

When you pour your first bottle of Hibiscus Gose, expect a beer with a bright pink body and creamy white head to fill your glass. A slightly salty aroma with a touch of coriander and citrus/cherry notes wafts from the beer. The leading flavor is a lemony tartness obtained from the brewhouse souring process with subtle salt and coriander notes. Hibiscus Gose finishes crisp and dry with a slightly lingering sourness that’s tempered by the sea salt, coriander, and hibiscus flowers.

“The road must eventually lead to the whole world.” – Jack Kerouac