Brewing beer is, at the base of it all, an incredibly simple process.

- Lauter, or strain, the wort off the grain.

- Boil the wort and add hops.

- Cool and aerate the wort, pitch yeast, and ferment.

See? Simple, right? I’ve had amazing beers that were mashed in modified coolers and fermented in plastic buckets and I’ve had so-so beers from super fancy breweries. We’re lucky to have a few cool brewing toys here at Boulevard. Over the next few weeks we’ll have show and tell in a series of posts focusing on some of the technology/toys we employ to make great beer.

Something I think is really cool as a brewer, is our gas chromatograph / mass spectrometer. In simple terms, the machine allows us to break beer down into individual compounds and chemicals that show up on a chart like this: 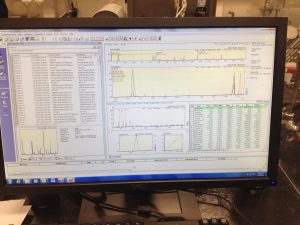 It measures the concentration of esters, sulfur compounds, diacetyl, and individual hop oils. We’re able to take a sample of Tank 7 from the fermenter after dry-hopping and analyze it with the GC/MS to find out how much of each oil we’ve extracted from the Amarillo hops. That information is then used to adjust hopping rates to achieve just the right amount of grapefruit/citrus aroma in the beer.

Our Quality Lab Manager, Joe, is primarily responsible for the operation of the GC/MS. He previously used a similar device while working for the EPA running air quality tests. Other commercial applications of GC/MS technology include: criminal forensics, sports anti-doping analysis, and medicine. We’re incredibly lucky to have one to figure out how hoppy our beers are. 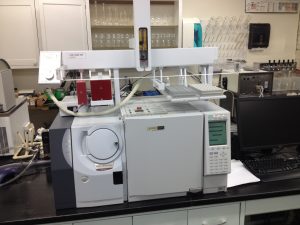 Here’s what the whole machine looks like excluding the display featured in the picture above. You can see the trays on the top right where samples are loaded in small jars with diaphragm caps. 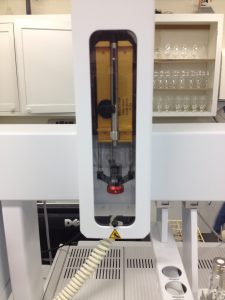 This is a close shot of the injection point. A small needle is lowered into the diaphragm cap so retrieve a sample from the jar.

The use of this fancy equipment gives us a very precise chemical snapshot of our beer, but the final evaluation of beer is done by our expert tasting panel. The GC/MS is incredibly valuable, but can’t compensate for the way individual compounds interact on the human tongue. It’s rough work, but we taste every batch of beer that leaves our warehouse.